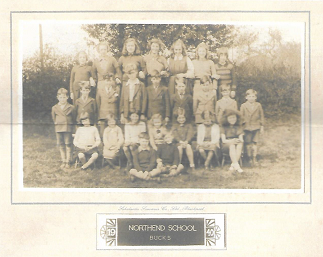 Susie has been contacted by an old (now emigrated) Northend resident who is looking to make contact with some long-lost family members.

Please see the letters from Malcolm Smith and reply directly if you have any information which may helpful to him. 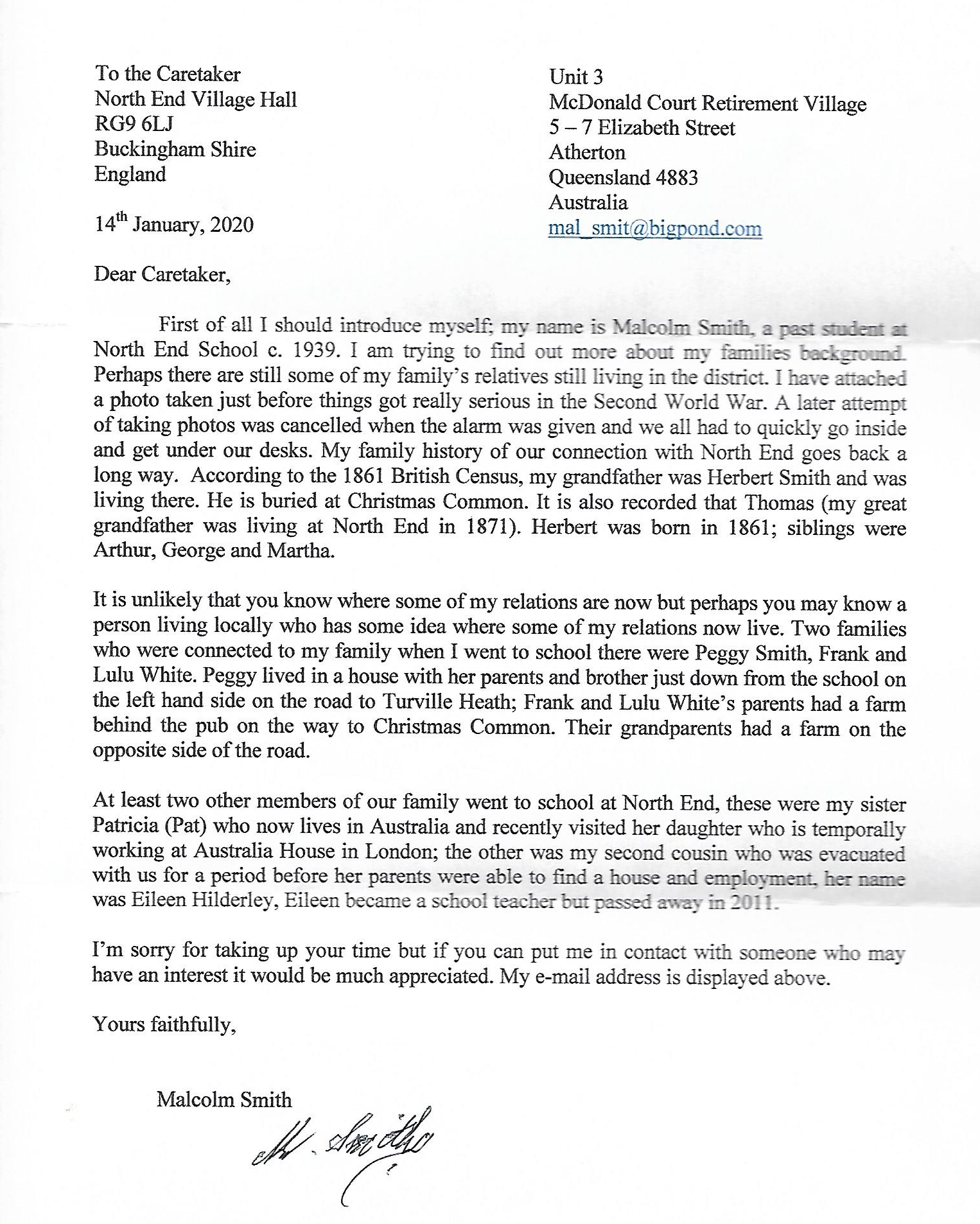 Oh what a lovely surprise! I was thrilled to receive your e-mail 10th February. Towards the end of my attendance to the Northend School I used to ride my bicycle and to protect it from harm I used to leave it at your house. In those days it consisted of two adjoining cottages. I left my bicycle in a shed at the cottage furthermost from the road. As I recall the elderly lady living there was Mrs Neighbour I recall entering the cottage on at least one occasion.  On becoming more confident in riding my bicycle I left Northend School and went to school in Watlington. Soon after Frank White and Hugh Spittle followed me to attend school in Watlington, we started school at Northend on the same day. I left school at fourteen. We kept in touch for a year or so after leaving. Later I learnt that Hugh Spittle had died.

My sister and I were born at Lower Dean, Watlington Park; my father was estate carpenter at Watlington Park, earlier my mother had been nanny for Lord and Lady Esher. While there my father built a house at Christmas Common, it was from here I started school at Northend. In the morning we caught the bus at the letter box. After school, no doubt depending on the time that coincided with the bus returning from Henley to Watlington we walked home. Sometime later we moved to the Middle Lodge where I spent the rest of my years before coming to Australia. My sister Pat also completed her primary school at Watlington before going onto Grammar School at Henley.

Returning to the names Neighbour; I have often wondered if there were several elderly ladies with that name in the district or whether it was one who moved around. There was one at Greenfield who regularly attended church at Christmas Common; one at Porto Bello and one in Watlington next to where I used to attend Army Cadets; I used to leave my bicycle at her place too. My Aunt Con Hiller nee Setterfield knew them all. There was also a younger fellow who lived at Porto Bello by the name of Johnny Neighbour who assisted my father in digging the well on the site of the house that my father later built at Christmas Common; unfortunately Johnny Neighbour was killed in WW2.

In your e-mail you mentioned that you had handed a copy to Peter Langford, Violet Langford was attending the school at Northend while I was going there her face is shown in the photo I forwarded to you; third  from the left in the back row.

I might just add that a year or so ago I was fortunate to be able to contact Robert Barber who lives in a house at Christmas Common named ‘Setterfield’, this is where my Grandmother Gertrude Setterfield  lived with her daughter Connie Hiller, son-in-law and grandson before coming to Australia. Robert is a photographer and kindly sent me the photo of the Middle Lodge in winter. Since making this connection my sister, her husband, daughter and her husband have had the opportunity to meet Robert and Jaine.

I have looked at the web-site you provided; I was interested in the history of the Northend School. In particular the name Rixon; Dr. Alan Rixon (not medical) was the name of my sister Pat’s husband who unfortunately passed away in 1992. Pat remarried in 2007 to Brian Garsden but retained the name Rixon.

Thank you so much Susie for the trouble you have gone to in answering my letter. My kind regards to you and your husband. 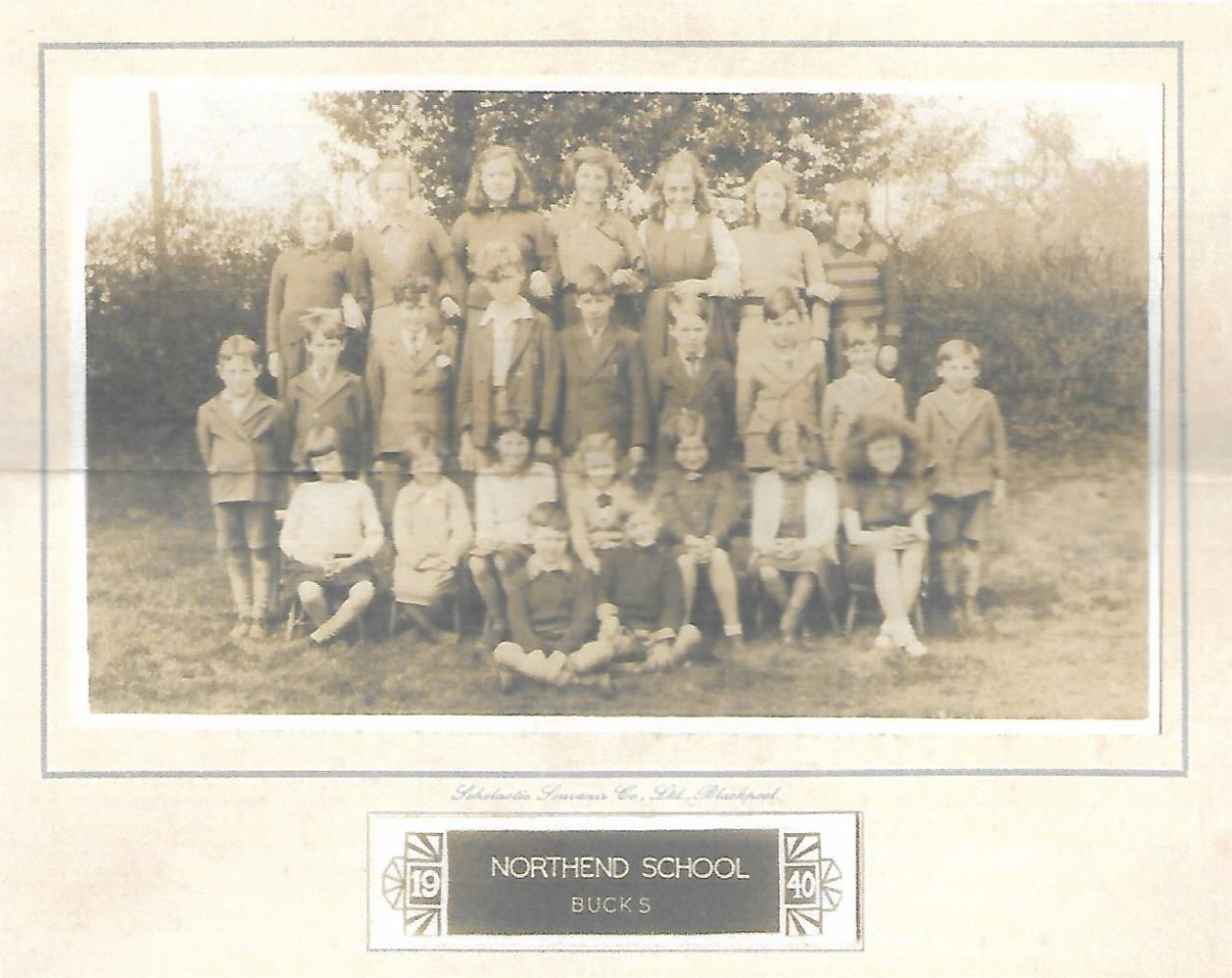